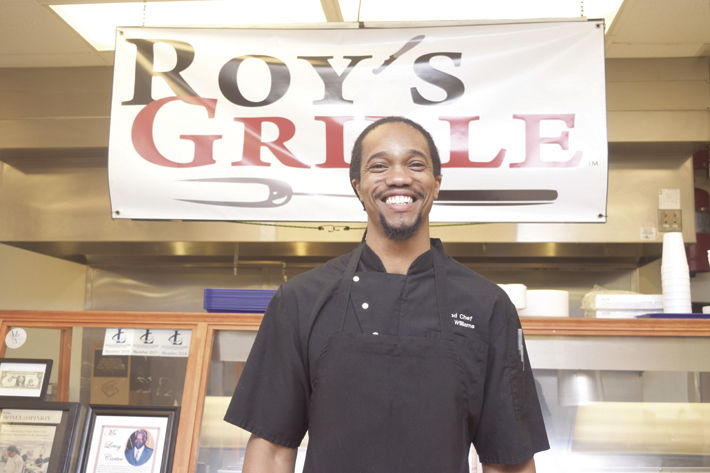 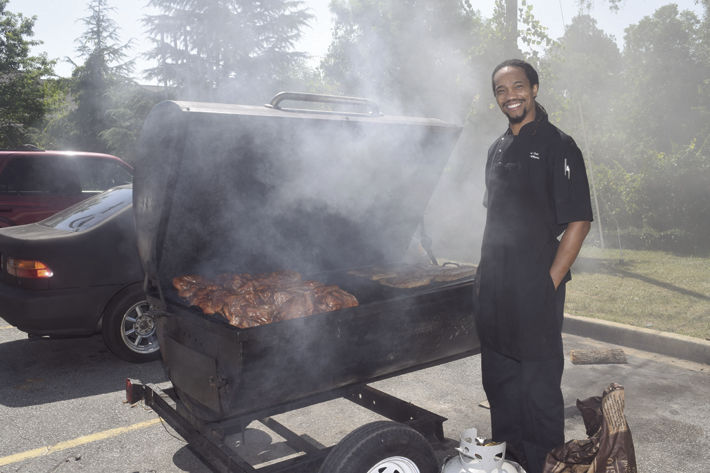 “I have always had an infatuation with food,” Williams says. “Growing up in the country, we raised our own animals and grew a lot of our own vegetables. So when it was time to cook, we would gather our own vegetables and slaughtered our own pigs and chickens. That’s when cooking was real. You couldn’t just go buy a bag of something and put it on the stove. You had to get some salt, pepper and spices. I grew up in the kitchen watching my grandmother, and learning from her. I still remember that the first dish I made by myself was a pot of rice. That’s where it all started – in the kitchen with my grandmother.”

In 1994, his family moved to Irmo. Williams was ten at the time.

Williams got his first job at age 15, working in a restaurant. In 2002, he graduated from Irmo High School. He spent a year at Johnson C. Smith University in Charlotte before returning home to attend Midlands Technical College. Since he had experience working in restaurants, Williams got a job working as a cook and nutritionist at a day care center.

“I worked there for about five years,” Williams recalled. “After that, I got a job at the Department of Social Services in their child and adult food program.”

Williams was still working a restaurant job on the side. By 2009, he was promoted to manager at the restaurant, and decided to leave DSS.

In 2013, Williams decided to put his food experience to work for himself. He founded William Christopher’s Catering.

“I was still working full time,” Williams said. “I was running an employee cafeteria at the Koyo Plant in Blythewood.”

“After a month, I got a call from someone who was familiar with my food,” Williams recalled. “They said ‘Chris, you have to check out the Exxon across from the Post Office in Lexington. They have a kitchen available.’ I came, and the rest is history. Within 30 days, I was in here cooking.”

So on September 16, 2014, Roy’s Grille opened in Lexington, serving breakfast, lunch and dinner. When he first opened, Williams had gourmet items on the menu, such as ribeye steaks. He quickly realized that selling more upscale items in a restaurant located in a gas station would be very difficult.

“People are reluctant to come into a gas station and buy upscale food,” said Williams. “They were used to things such as gizzards, bologna sandwiches and chicken that has been sitting out for two hours. People are not going to come into a gas station to buy a Reeses Peanut Butter Cup and a ginger ale, and respond to someone selling a ribeye steak.”

So Williams changed his menu to feature a wide variety of southern favorites. But unlike food typically sold in gas station restaurants, the menu items at Roy’s are freshly made and cooked to order. Popular lunch and dinner items include ribs, pulled pork, hamburgers and homemade bacon.

“I wanted something that was unique to the area, but not so far-fetched that people would be afraid to come try it,” Williams said. “But everything we sell, I put my unique spin on it.”

Nearly everything served at Roy’s Grille is freshly made in-house.

“We cut, cure and smoke our own bacon,” said Williams. “We hand-make our hamburger patties. We make our own BBQ sauces.”

“I take the homemade bacon and put it into potato salad,” Williams continued. “We have Caribbean cole slaw with fresh ingredients. Our pasta salad is spicy. I also make a smokehouse rice – I take smoked pork stock and make rice out of it with peppers and different things in it. I even dice up rib meat and put it into the rice. We also have a seven-cheese mac & cheese that’s very popular. We also make our own hash. All of our signature side dishes are unique to Roy’s Grille.”

Williams is proud of his restaurant, but says that he hopes to expand to new locations in the near future.

“We outgrew this location nearly a year ago,” said Williams. “So I am looking for a stand-alone location in the Lexington area, because this is where I got my start. And once we get a new location, we will be able to expand to a more upscale menu, with items such as ribeye steaks and fresh salmon. Maybe add some live jazz and a Sunday brunch. There are some concepts I want to explore to make Roy’s Grille in Lexington a destination.”

When asked why the restaurant has been successful, Williams says that it is because he is not afraid to fail.

“It’s a leap of faith when you decide to stop working 40 hours for someone else to work 80-100 hours for yourself,” Williams said. “I tell people that if you are afraid to fail, you will never put yourself in a position to succeed. You will never know what you can do until you try it.”