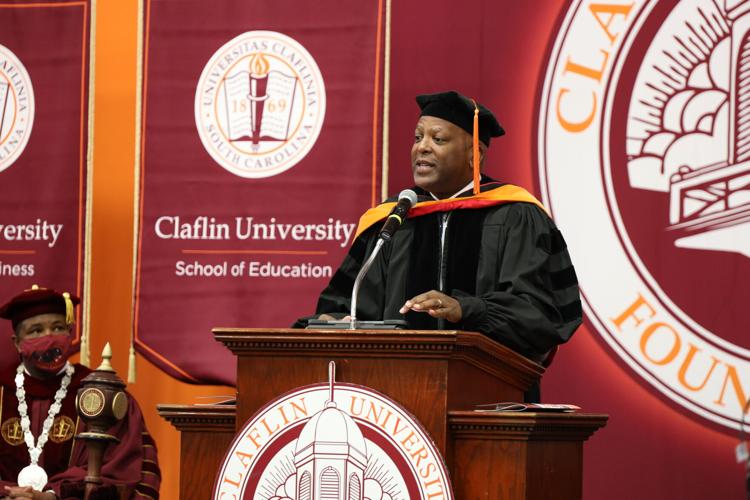 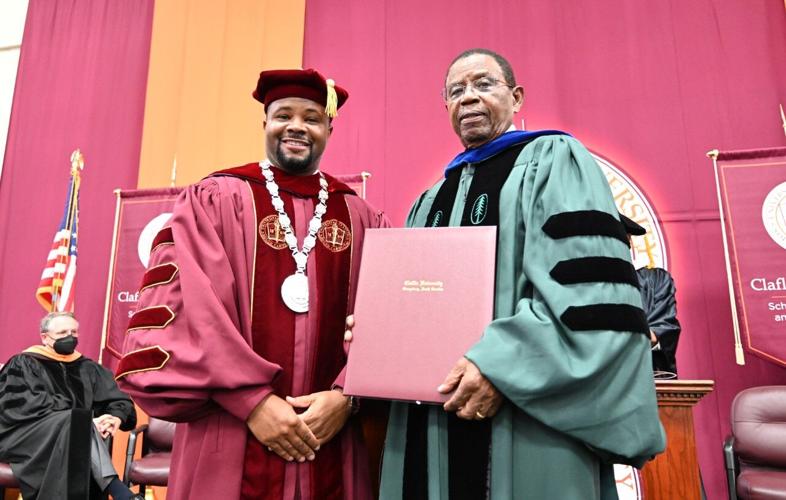 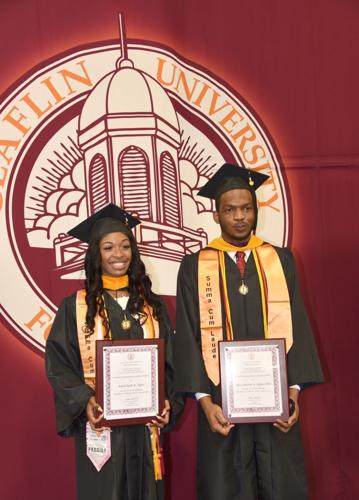 Claflin's Top Honor Graduates for the Class of 2022 were seniors Amariya Ayee and Macvincent S. Agha S.-Oko. Both students had 4.0 cumulative grade point averages. Ayee is a biology major from Columbia, S.C., and Agha-Oko is a computer engineering major from Orangeburg, S.C. Four other seniors also had 4.0 GPAs.

Claflin’s Spring 2022 Commencement Convocation celebrated the University’s scholars and world-class faculty. More than 290 graduates were conferred bachelor’s and master’s degrees during the ceremony on Saturday, May 7, at 10 a.m. in the Jonas T. Kennedy Health and Wellness Complex.

“In each of you is the power to change the world,” said former Columbia Mayor Stephen K. Benjamin, who delivered the keynote address. “Dream big, stay focused, and use your time wisely. Don’t lose sight of what is important. You have an incredible responsibility to your parents, grandparents, great grandparents, and ancestors. Use the talents and the gifts God has given you. Leave this world better than you found it.”

Benjamin was elected Mayor of Columbia in April of 2010 with a vision of transforming South Carolina’s capital city into a talented, educated and entrepreneurial city of the New South.

He served as mayor until December of 2021. He currently serves as President & CEO

“This class is not like any other,” Benjamin said. “You lived through the greatest pandemic since 1918, the greatest turmoil in the economy and an election since 1932, and the greatest social unrest since 1968. But you thrived, and you are still thriving.”

Benjamin cited Sarah Mae Flemming, a black woman from the Eastover, S.C., who challenged a Jim Crow segregation law in 1954. She was physically assaulted after taking a seat in a section reserved for white passengers while riding a bus in Columbia, S.C. Flemming sued the bus company, and months later, Rosa Parks experienced a similar injustice that led to the Montgomery Boycott in Alabama. The U.S. Supreme Court later ruled that bus segregation was unconstitutional.

“Focus on solving the vexing problems that face us today,” he said. “Leadership requires you to act. Activism without action is just a conversation. The world needs your thoughtful and intelligent brand of leadership right now. An extraordinary life awaits you, like Fleming -- history has found you.”

Tisdale, a 1965 honors graduate at Claflin, was recognized for his exceptional visionary leadership while serving for 25 years as the University’s eighth president. Dr. Assanie-Shivji is an associate professor in the Department of Biology.

Both students had 4.0 cumulative grade point averages. Ayee is a biology major from Columbia, S.C., and Agha-Oko is a computer engineering major from Orangeburg, S.C. Four other seniors also had 4.0 GPAs.

Skye Giovanni Samuel-Williams, who passed away during the Fall 2021 Semester, received the Bachelor of Science degree in computer science posthumously. His mother, Letitia Samuel, and his brother, DonShae M. Samuel-Wiggins, participated in the presentation.

“From the day you attended your first class, you became a member of the Claflin University Family. But today is special -- you will become a graduate,” said Claflin President

“For many of you, this is history as you are the first in your family to graduate from college.

But for others, you are part of a long Claflin heritage – you have others in your family who have graduated from Claflin University. But today is your day. This is the day that makes you

special -- and we are celebrating you.

Warmack told the audience that Claflin had come a long way in 153 years. But it still has a long way to go.

“Our recent history has been quite remarkable when we consider we did not just survive a pandemic – we thrived in a pandemic,” Warmack said. “And it was because of the dedication, motivation, and commitment to the University by everyone in this room. Students -- we are here for you. We want you to not only graduate -- but we want to make sure you are gainfully employed after you graduate. Years from now, when we come back, Class of 2022, we want to talk about your accomplishments.”

More than 90 Golden Class graduates from 1971 and 1972 were also honored during the commencement ceremony. Claflin alumni have earned a national reputation for giving back to the University. Claflin’s annual alumni giving percentage is above 40 percent and ranks highest among Historically Black Colleges/Universities (HBCUs). The alumni’s generosity was on full display during the commencement weekend as Warmack announced that the Golden Classes had donated a combined total of $352,955 to support several university initiatives.

“Thank you – Golden Classes of 1971 and 1972, for your commitment to Claflin University and for coming back to participate in the Golden Class Weekend,” Warmack said.

Sorry, there are no recent results for popular images.